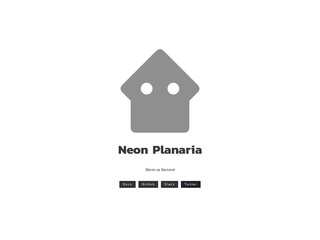 Neon Planaria is a new version of Planaria which is completely re-written from scratch.

It is drastically simplified yet exponentially more powerful.

The main design goals are: simplicity and flexibility:

Planaria lets you build ANY API backend system from Bitcoin.

The framework is made up of two components:

Neon Planaria is as minimal and as easy as it can get.

No hassle to set up containers, no hassle to worry about ports and firewalls.

No requirement to set up a whole infrastructure and download hundreds of gigabytes of blockchain to do anything, thanks to built-in Bitbus support. (Of course, it also gives the option to plug in a Bitcoin full node later if needed)

It's literally a single node.js app.

All it takes is an npm install, and you're set to go.

Planaria used to have a constrained architecture. It used to be wrapped inside a Docker container, was powered by MongoDB only, and had a quirky & complicated declarative syntax you needed to learn.

Neon Planaria has no such constraints and no limits.

It achieves this goal by throwing away all the bloat which existed in the previous version of Planaria and becoming minimal.

Now you can do whatever you want, including using any Database system..

But that's not all. The whole point is that there is no limitation anymore:

You can employ as many containers as you want concurrently.

For example, you can power ALL of Elasticsearch, MongoDB, and even Kafka from a single Planaria application.

This is made trivial because Planaria itself is no longer a container, but has become an engine that can operate anything, including interacting with multiple containers, executing 3rd party programs, and even making system calls.

The Planaria part of the framework has two methods: start and exec, and that's it.

You can mix and match with your existing backend or workflow.